A former Aston Villa star has been identified as the man who died after being shot by police with a Taser. A Taser was used on a 48 year old man in Telford, after reports of concerns for safety caused Police to attend.

At 1:30am the man later identified as former Villa striker Dalian Atkinson had to receive medical attention, Atkinson was then pronounced dead at 3:00am.

In his 16 year career he had spells at Aston Villa, Ipswich and Sheffield Wednesday. 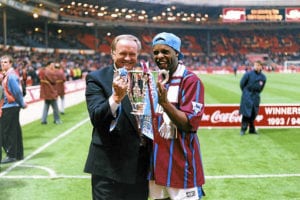 Having grown up watching the early years of the Premier League, we have fond memories of watching Atkinson on Match of The Day. The most memorable moment for us was 1994 League Cup Final, where Atkinson was part of the Villa team managed by Ron Atkinson that beat Man Utd 3-1.

It’s probably fans of the Midlands club that will be hit hardest by the news of his sudden death. Paramedics said the gentle giant went into cardiac arrest on his way to hospital, but were unable to resuscitate him.

Unsurprisingly the incident has been referred to the police watchdog, the Independent Police Complaints Commission (IPCC).

The incident occurred in a residential neighbourhood with resident’s offering statements of what they witnessed. Paula Quinn told the Shropshire Star she had witnessed the Taser being fired after hearing shouting.

“I stuck my head out the window to look out and I saw two police officers shouting at the gentleman and he sort of was stumbling towards them and the police officers warned him they would Taser him, but he just seemed a bit, perhaps, inebriated.

“And because he continued to step forward once or twice – non-threatening – they deployed the Taser,” she said.

“As the Taser hit him in the stomach he just went ‘doof’, down like a lead balloon.”

As expected, social media has been inundated with messages of condolence from his former clubs, team mates and fans

No doubt teams will want to pay their respects for to the Aston Villa legend this week, as football comes to terms with the shock passing of such a talented, genuine and thoroughly decent guy.