It’s been the topic of discussion for few weeks now but after much speculation the trigger has been pulled, Leicester City have sacked Claudio Ranieri. Their history making coach didn’t even manage to last the full season after leading The Foxes to Premier League Glory, but the door has barely shut behind him and there is already a next Leicester City manager betting market with Ladbrokes.

Match of the Day host Gary Lineker described Ranieri’s sacking on his twitter account as “inexplicable, unforgivable and gut-wrenchingly sad”. Although sacking the guy after what he achieved the previous season seems harsh, he did appear to have lost his way a little this season. 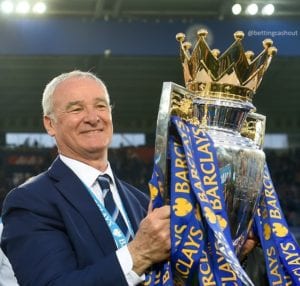 Leicester City may have made history last season by defying odds of 5000/1 to become champions, but their history making antics are on the opposite end of the scale this time round. Recording the worst season so far of any defending Premier League champion.

Only last night the Foxes managed to rally back in Spain to secure a vital away goal in their Champions League tie with Seville. Given the right level of performance, of which they are capable, Ranieri could have easily masterminded a 1-0 victory to secure their passage through to the next round.

Unfortunately, the Leicester board decided the show of unity was too little too late, taking the decision today to relieve Claudio of his duties in order to steady the ship.

Regardless of whether you think the decision was harsh, the board now have to focus on finding the right man to be the next Leicester City manager.

The early front runner with Ladbrokes appears to be Roberto Mancini, but being as the starter pistol has only just been fired we wouldn’t give that much credit. The former Manchester City boss has been installed as the 7/4 frontrunner but he wouldn’t have the endless funds he joyed at the Etihad.

Next in the running to be Leicester’s new boss is Alan Pardew at 5/1, which is a far more likely option. Pardew was sacked by Crystal Palace at the end of last year and despite not being as high profile as Mancini, he is capable of keeping Leicester in the Premier league.

In all honesty, there doesn’t appear to be too many options for a long term manager at the minute, which is why we think Leicester will appoint a care taker manager until the summer to weigh up their options.