If you’d have told me at the start of Euro 2016 that Wales would have topped their group, that Portugal would scrape through as a third place team, I’d have laugh at you.

But that exact scenario happened and set Wales on a history making run to the semi-finals, where they will face a lacklustre Portugal.

This historical match up also sees two of the best players in the world go head to head.  Gareth Bale and Cristiano Ronaldo both ply their trade at Real Madrid and know everything about each other’s bag of tricks.

On a stage this big friendships matter none, it’s all-out war as Bale and Ronaldo battle it out to see which Galacticos star will shine that little bit longer and earn full bragging rights. 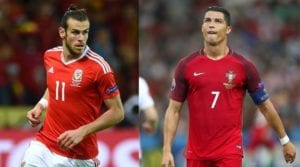 Bale helped Wales see off pre-tournament favourites Belgium in emphatic fashion on their surprise march. Although he didn’t get on the scoresheet, just the mere fact he was in the team caused the Belgians chaos, especially for the first goal.

Belgium made the mistake of concentrating all their attention on the Madrid man, leaving the door open for the rest of the team to flourish.

Portugal may learn from that mistake but have serious issues of their own to focus their attention on, they may be semi-finalists but that is far from deserved, even Ronaldo has been off colour in France and were not just talking about that ghastly kit.

The Ballon d’Or winner squandered a golden opportunity against Poland, taking his eye off the ball at the critical moment, demonstrating his head may not be in the right place.

The fact that Portugal are failing to meet the standards expected from their talented squad could work to Wales’ advantage, #TogetherStronger isn’t just a marketing slogan it’s a mantra that is the glue in the Wales squad.

Unity is key at tournaments like this and Wales have it in abundance, come the 6th July they’ll need to be more united than ever with Ramsey suspended.

With the Arsenal man missing, Bale will need to be on top form to steer Wales to the Euro 2016 final.

The game itself will likely boast plenty of chances, with Ronaldo and Bale the spearhead, but we think Wales can edge it to continue their historic journey.

Wales to win BBC SPOTY Team of the Year 4/1