This week sees York racecourse hold its annual Ebor Festival where an expected crowd of in excess of 90,000 will embark on the Knavesmire for a week of top class flat racing, fashion and fun.

The Ebor Festival 2015 begins on Wednesday 19th August and ends on Saturday 22nd August with the richest Flat Handicap race in Europe, the Ebor itself, taking place on the final day. Thursday is Ladies Day where this year the best dressed racegoers get the chance to win a trip to Dubai. It is always a great event and I would recommend anyone to go if they have the chance to visit and enjoy a great week. 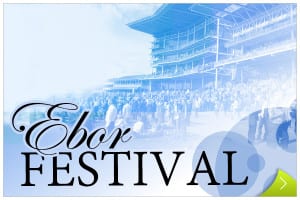 Day One – The highlight of Day One is the Juddmonte International Group One race which was won in 2012 by Frankel, the highest ranked flat horse on the planet and this year sees one of the eagerly anticipated clashes of 2015, the unbeaten Derby winner Golden Horn takes on the 2000 Guineas Winner Gleneagles.

Golden Horn is tried over course and distance when beating Jack Hobbs and the odds state that he is the one to beat. This will be the first time Gleneagles has taken on a mile and two furlongs and although that is the main question mark there is no doubt that this horse is top class. Unfortunately his form hasn’t been franked to a level that would be required to beat the favourite so unless the extra trip brings out extra improvement, although I’m not sure why it would, I don’t feel Gleneagles will be a match for Golden Horn.

Time Test is an interesting runner based on his form line through Peacock, whom Golden Horn beat back in April. There is no doubt that Golden Horn’s form is a lot better than Time Test, however the latter is a fast improving horse and one that could put up a challenge.

If I was to have a bet it would be a small each way on Time Test, but as there are only two places and many unknowns I won’t be wagering in this race.

Day Two – The 2nd day hosts the Yorkshire Oaks which is a trappy affair but a race in which you may be able to find a decent priced winner.

The favourite for the race is Covert Love who has course form in the bag and beat current second favourite Curvy and third favourite Jack Naylor last time out in the Irish version. The Irish Oaks winner looks set to go well for trainer Hugh Palmer.

Lady of Dubai has excellent form putting up challenges every time to the highly thought of Legatissimo and she looks sure to give her usual tough performance.

At a bigger price the one I’m interested in is Crystal Zvezda, with Michael Stoute’s horses finally hitting some sort of form following a frustrating season. I was very taken by this horses’ victory against Montalcino first time out this year, although the form hasn’t necessarily been franked she settled down a lot better last time out, when beaten by a potential high class filly in French Dressing.

The form line through Pamona says to me that she is on the same level if not better than Curvy, so for me Crystal Zvezda is the each way bet of the race at 12/1.

Day Three – Friday sees the Nunthorpe Stakes take place, which is for the sprinters with a 5 furlong trip in front of them.

Two time winner Sole Power is set to take his place and has a wealth of experience on his side however I feel this year the competition is a hotter than it has been in a long time.

Favourite Acapulco made a telling impression in its first British start at Ascot, when comfortably beating a 19 strong group 2 field and he was well touted to do so that day. The Wesley Ward trained horse could be a star in the making and he may romp away with this should he be as good as he looked at Ascot, however at 7/4 I will not be investing in him against this top quality field.

Muthmir is a horse I have liked for a long time and always puts in his performances and I fully expect him to be there or thereabouts again. At big prices Goldream and Pearl Secret may be worth a small dabble but the horse I will be backing each way, on the proviso the favourite is top drawer, is Mecca’s Angel. Unlucky last time out and gets the mare’s allowance.

The main issue is the ground, as Michael Dods has stated that she will not run if the ground is not good or softer, therefore if she runs that would mean the ground is fine and she looks set to run a massive race. If she doesn’t take her chance I will be sticking with Muthmir e/w

Day Four – The final day of the Ebor Festival sees the Ebor itself take place at the Knavesmire, the Ebor is typically set up to find a big priced winner as the field is full of unknown quantities.

This years’ field has an Irish Raid feel to it with the top three in the betting making the trip from over the water.

Clondaw Warrior looks Willie Mullins’ top charge, although you couldn’t rule out Wicklow Brave either given his good form on the flat this season. Both horses are predominantly jumps based but have put in good accounts on the flat this term and it would be no surprise if either of them came home in front.

Tony Martin sends over Quick Jack who has now won at the Galway festival in the past two years. He followed up last years’ win with a game 3rd place behind Big Easy on the flat at Newmarket, with the trainer’s record with this type it would be no shock seeing him win the big race.

I will be staying on the Irish horses for my selection and although I don’t like backing favourites I think Fields of Athenry has a huge chance of claiming victory on Saturday. The youngest horse in the field and has the highest rating also, looks well weighted and at 5/1 I’ll be backing.