Home » Changing of the Garde – Next Aston Villa Manager Odds

Changing of the Garde – Next Aston Villa Manager Odds

PLEASE NOTE: Following the removal of Dean Smith, the odds for the next Aston Villa manager below have now been updated. Write up will be updated shortly – Despite only taking over as Aston Villa manager at the beginning of November, it appears Remi Garde could be about to walk away from the midlands club, leaving them in turmoil and in need of a third manager this season.

The relegation threatened club are experiencing their worst period in Premier League history, but following the arrival of Garde they appeared to turn a corner, with a glimpse of survival on the horizon.

In the short time Remi Garde has been in charge he has managed to win four and draw seven from eighteen games, which is a vast improvement from Tim Sherwood’s reign this season. 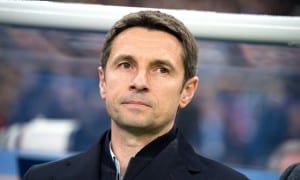 But it appears the former Arsenal player has lost patience with the clubs board, following a frustrating transfer window which saw none of the essential additions the squad needed.

Garde is reported as citing the financial troubles of the club as the reason he is considering his future, claiming they are far more serious than he was lead to believe when installed as manager.

It’s this uncertainty surrounding his position that has led to bookies placing him o atop of the next Premier League manager to leave list, which is why we’ve put together a list of potential replacements.

The Aston Villa boss’ odds of leaving are not the only odds in the market to take a tumble, now standing at evens from 6/1.

Should Garde leave choose to leave, Eric Black would likely step in on a caretaker basis, but Ladbrokes have him as joint favourite to take charge on a permanent basis, along with former Leicester manager Nigel Pearson.

As with any managerial vacancy there is always a rank outsider that supporters would love to have in charge, it looks like Michael Laudrup is that guy this time round, inserted at 18/1 he would be the ideal replacement.

Richard Marsh of Ladbrokes News said: “Garde’s days at Villa Park look numbered after seeing all his transfer targets head elsewhere, and it appears Villa fans will be welcoming a new manager sooner rather than later.”

Looking for some secure payment options for your weekly betting? Have a look at these Boku betting sites, PayPal betting sites or in house options like William Hill Plus and Coral Connect.