You may have been perusing a betting site like bet365 and spotted the double chance bet. But what exactly is the meaning of this popular betting market? There are just some football fixtures that scream a draw is highly unlikely, well that’s where a double chance comes in to play.

What Does Double Chance Mean?

As you probably know, there are three potential results from 90 minutes of any football match; these are a home win, a draw or away win. These are generally known as Win Draw Win bets.

With a double chance bet you can effectively hedge your bets by backing two of the possible outcomes. It’s worth noting at this point that this is slightly different to Draw No Bet markets. Available at most football betting sites, a single bet gives you twice the chance to win. 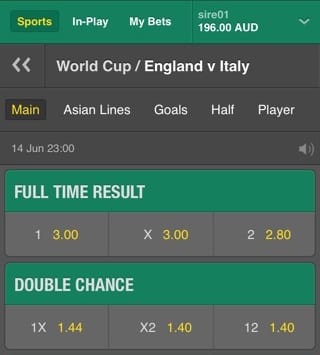 All of the above bookies have a good reputation, as well as being competitive. But from our experience, a double chance bet365 bet is our number one choice. This is mainly due to the odds available, it’s rare for bet365 players to go elsewhere for this reason.

We tend to be quite visual when learning something new, so with that in mind we’ve got a handy little example for you.

Let’s say Tottenham are playing Crystal Palace at home. Some poor recent form or injury concerns over vital players could have you feeling an upset is on the cards. Rather than lumping all your cash on Palace for the win, adding the draw option might just sit better with you.

With a double chance bet you can cover both scenarios without having to place two separate bets; spreading your betting pot and lowering your potential winnings. It also stops the potential of a late goal sealing a draw and spoiling your bet. The three options available are as follows;

In the first example above, your bet would win if Spurs win or the match ends in a draw. The second bet would pay out in the event of a draw or a Palace win.

The third option is a little more risky and is also not used very often. You would only be able to collect any winnings if Spurs or Palace win. So if the game ends in a draw you would lose your double chance bet. This option is best used in conjunction with cash out betting, especially if you can feel a win slipping away.

We’re guessing you may have already figured out the benefits of a double chance bet meaning this may not come as a shock. The chances of a winning are significantly increased compared to placing the same amount on a single bet.

This is the perfect bet for those of you who are a little more risk averse, as you are covering two options in one. Unfortunately there is a slight downside to this market. As the bet itself is less risky, then naturally the potential reward is a little lower.

It’s simply the price you pay for having a little doubt creep, which stops you placing a straight win bet; which would be available at much higher odds on the Win Draw Win market. But this shouldn’t be a reason to dismiss a double chance.

When to Utilise a DC Bet

Bookmakers can sometimes be sticklers for reputations and ignore current form. For this reason, we tend to use double chance betting when an away team has been undervalued; or a team like Man Utd or Chelsea are in the middle of a down turn in form.

Basically if Man Utd are playing Chelsea at home, the bookies would likely have Utd as favourites. But based on current form for both teams, Chelsea are more likely to take all three points. So the bet to take here would be a Chelsea/Draw.

Regardless of when you utilise it, it’s a common view that a DC bet is advantageous everyone; whether that be a risk averse low stake bettor or a high roller. However, is it right for you?

Should I Place a Double Chance?

Most people tend to bet for the opportunity of a high profits, unless you’re staking a lot of money then the double chance may not be for you. It tends to suit people who want to slowly build their betting pot, or those who just enjoy throwing a few quid on and the thrill of the win outweighs the lust for a profit.

In order to achieve potentially bigger profits, compiling an accumulator of double chance bets is definitely the way to go. As you’re compounding small odds low risk bets in to one big bet, which in theory have a greater chance of succeeding. There is also a better chance of you retaining your initial stake if used in conjunction with bet365 cash out betting or Combi+ from Bwin.